Donate to the Tidewater Chavurah

We are grateful for the generous support The Tidewater Chavurah receives 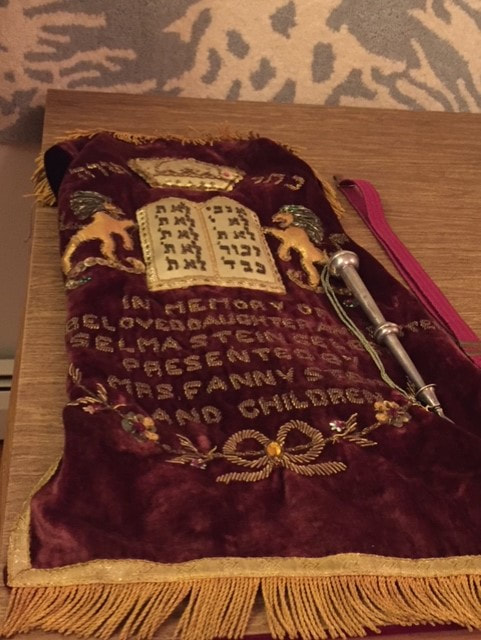 ​​How to create a Torah scroll


Two wooden sticks,
The skin of a kosher animal
and some chemicals mixed together:
That’s all it takes to write a Torah


That’s the refrain of a poem I read to the minyan that gathered for Shabbat services on April 8, 2022. Of course, the poet continues, there’s an entire heritage behind the Torah, but those are the basic physical components. I went on to describe the preparation of the scroll in the presence of Tidewater Chavurah’s own sefer Torah. The scroll had just been given to us by B’nai Sholom Temple in Quincy, IL, which donated its four sifrei Torah after selling and deconsecrating its venerable synagogue building in 2021.
Just as most children don’t associate their hamburgers with a steer penned up in a feed lot, most of us don’t associate the Torah scrolls we see in a synagogue with the process for making them. That process is long, smelly, and so labor-intensive that very little of it can be done by machine. Torah scrolls are made by people, and they’re made one at a time.
A Torah scroll is written by hand not on any kind of paper but on parchment, the prepared skin of an animal. The animal must be kosher: calf, sheep, goat, or deer, though it doesn’t have to have undergone ritual slaughter.
To make an animal hide into parchment, someone first has to clean it on both sides. The preparer scrapes off blood and meat from one side, then places the hide in an alkaline solution, usually lime, which loosens the hair. The hair comes off with the scraper used to remove the blood and flesh or with a heavy, coarse glove. After that, the hide soaks in fresh water for 24 hours to restore it to a neutral pH.
The preparer stretches the hide on a frame, and when it’s dry, it gets smoothed out with three sanders: heavy grit, medium grit, and fine. The goal is to thin out the skin from the thickness of leather to that of heavy paper and to get it smooth enough to write on. Then the parchment is cut to the size of the panels to be used in the Torah and scored lightly so that the lines of writing are perfectly straight.
The lettering of the scroll is done by a sofer (scribe), who immerses in the mikveh before starting the project. He (or, in the 21st century, sometimes she) uses a quill pen made of a feather or reed; a metal pen might damage the parchment. The ink has to be black, made of tannic acid and iron sulfate (additives to make it blacker might be a substance as lowly as soot). Only one sort of Hebrew calligraphy is used, the Assyrian script, which is why every Torah scroll looks the same inside. It isn’t true that if the sofer makes a single mistake, the entire panel has to be discarded; the mistake can be scraped off the parchment and corrected.
Throughout the process, the makers of the scroll say blessings devoted to the divine intent of the project. For example, the person preparing the hide might say, “I am processing these hides for the sake of the holiness of the sefer Torah,” when putting the hides into the lime solution. The sofer will say something similar about writing before beginning the task. After every character of the Torah has been written (more than 300,000 of them), the panels are sewn together, and the parchment is attached to the two wooden poles, which have been turned on a lathe to form handles and fitted with disks to keep the parchment straight.
At every step, the connection between the human creator and the divine Creator is established, making the sefer Torah the most holy of Jewish ritual objects. We at Tidewater Chavurah are blessed to have received this symbol of community, learning, and faith.